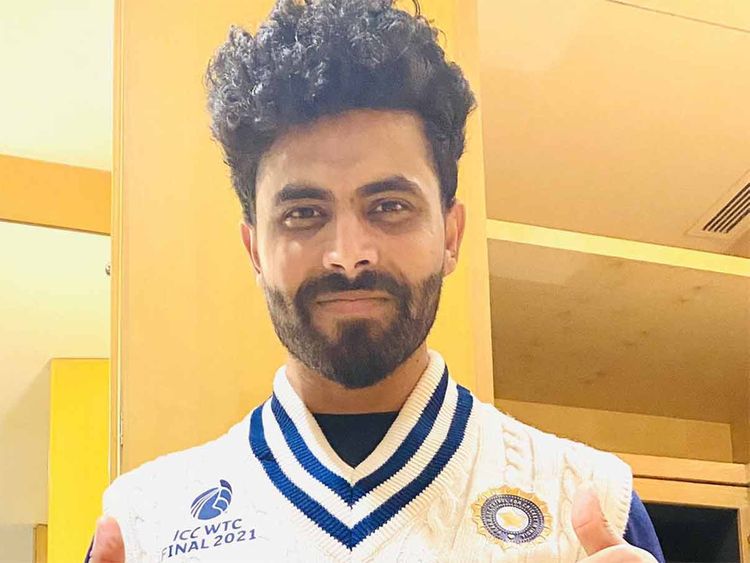 All-rounder Ravindra Jadeja shared the photo on Twitter and he captioned the post as: “Rewind to 90’s #lovingit #India.”

The sweater donned by Jadeja has a blue V-neck border, that used to be a regular feature in the longest format till the 90s.

The Indian cricketers might be in quarantine ahead of the UK tour, but they are sweating it out in the gym to ensure they are fit and ready to go once they get out of quarantine in England ahead of the WTC final against New Zealand in Southampton.

Taking to Twitter, BCCI had posted a video of the players working out in the gym which read: “Getting stronger each day!”

The BCCI has also ensured that the cricketers will get their second dose of the COVID-19 vaccines in England under the guidance of the UK health department.

“The team has already taken the first dose here after the government opened the vaccination process for all above 18. The second dose will be administered by the UK health department once the players are eligible to get the second jab as per rules,” BCCI sources had told ANI.

The BCCI made a foolproof plan for the national team before they depart for the UK and arrangements were made for all the players to undergo three RT-PCR tests before assembling in Mumbai on May 19.

After completing the two-week quarantine in Mumbai, the team will undergo another 10-day quarantine in the UK. The second period will see them first undergo a hard quarantine before they take the field to train for the WTC final against New Zealand in Southampton, starting June 18.

India on road to redemption as Australia skittled for 195 in...