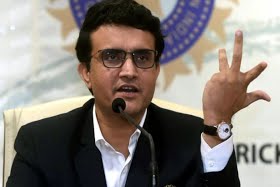 Reacting to the BCCI’s decision to suspend the Indian Premier League’s title sponsorship deal with Chinese mobile maker Vivo, the Indian cricketing body’s President Sourav Ganguly termed it a ‘blip’ and not a ‘financial crisis’.

Although BCCI had announced Vivo as the title sponsor for IPL 2020, the Chinese company pulled out of this year’s event in the wake of massive backlash owing to the Galwan Valley clash. The 2020 edition will be held in the UAE from September 19.

At a webinar that was organised by educational book publishers S Chand Group, Ganguly stated, “I wouldn’t call it as a financial crisis. It’s just a little bit of a blip.”

Assuring that the cricket board has a ‘Plan B’ in place, Ganguly went on to add, “BCCI, it’s a very a strong foundation – the game, the players, the administrators in the past have made this game so strong that BCCI is able to handle all these blips. You keep your other options open. It is like Plan A and Plan B. Sensible people do it. Sensible brands do it. Sensible corporates do it.”

Further, speaking about ICC’s decision to allow India to keep their 2021 World Cup hosting rights, Ganguly explained, “India was designated (to host) the 2021 and 2023 World Cups so there is not a big change in that. Yes, the COVID situation had kept everybody alarmed, but that’s the way it is.”

–By A Cricket Correspondent

Eoin Morgan, KL Rahul will be desperate to seal the fourth...