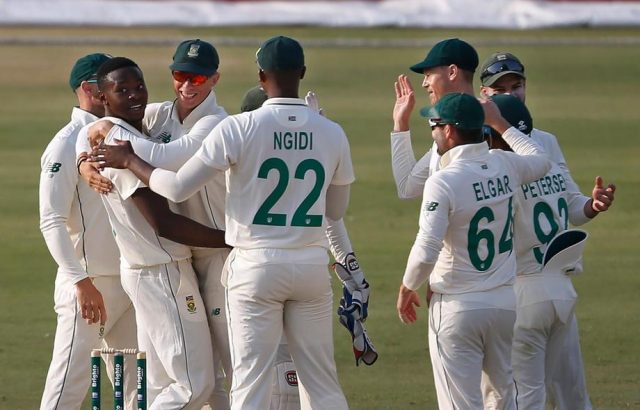 The fire wasn’t in Babylon. It was in Pretoria. Mark Boucher says South Africa’s 2-0 Test series win in the Caribbean was sparked in conversations that crackled like the flame-warmed air that carried words and feelings into hearts and minds.

“We sat around the fire in Pretoria, where the new captain asked a couple of questions about where we are and where we were going and where we want to be,” Boucher told an online press conference in St Lucia on Monday (June 21) after Dean Elgar’s team beat West Indies by 158 runs with more than a day to spare.

That followed their victory by an innings and 63 runs at the same ground last week. It was their first success in the five away series they have played since they won in New Zealand in March 2017, and only their second in seven series all told.

“Quite a few honest chats came out there, as they do around a South African fire at night,” Boucher said. “The guys bought into a process that [Elgar] wanted to align his tenure with. You were either on the bus or not on the bus. Thankfully everyone decided they were on the bus.

“It doesn’t only work when you’re on the field. That’s where you get results, but a lot of effort’s got to be put in behind close doors – the way we train, the way we talk, the language, the confidence, the way we speak to each other. That’s probably where it started, at that fire.”

Elgar has played under five captains, notably Graeme Smith and Faf du Plessis, and led the team in two Tests himself before he was appointed before the series. An old-fashioned, unvarnished straight-talker, Elgar seems to have left his players under no illusion about what is expected of them – including that sometimes they will be required to play what he has called “boring cricket” to stop opponents from gaining an advantage.

“Certain guys have different language,” Boucher said. “Dean might say it’s boring. We say it’s just disciplined cricket. But the language he’s been using is obviously resonating with the players, so good on him for bringing it.

“Test cricket is all about being able to absorb pressure at certain stages and then being able to apply it. Our guys are becoming smarter at choosing those moments – when to absorb and when to apply. If you want to call that being boring at certain stages of the game, yes, you have to be. But what’s impressive for me is that there have been stages in this series where we could drive the nail in and we did that. It’s good to see the guys respond to the language a leader is sending out.”

ICC CWC IND VS PAK : “Newborn Daughter Has Put me...

“It was too late to pick de Villiers for the World...