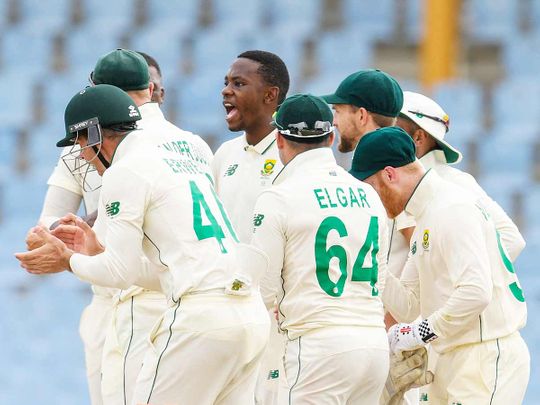 Gros-Islet, Saint Lucia: South Africa’s relentless pace attack left the West Indies facing the prospect of an innings defeat inside three days as they limped to 82 for four, still needing 143 runs to make the tourists bat again, at stumps on the second day of the first Test in St Lucia on Friday.

The West Indies were routed for 97 – their lowest-ever total in a Test innings against the Proteas – after choosing to bat first on day one.

In their second innings on Friday, the home side again laboured to come to terms with the consistent quality and intensity of the visitors’ pacers and seamers.

Earlier, Quinton de Kock had flailed a flagging West Indies bowling attack on the way to an unbeaten 141 to lift South Africa to a first-innings total of 322 and a commanding first-innings lead of 225 runs.

Having struggled in his previous four Test matches with the burden of captaincy, de Kock seemed more at ease without that responsibility and after a comparatively sedate morning session he exploded into an array of attacking shots in the afternoon period in partnership with the lower order, reaching a sixth Test century and first against the Caribbean side.

He reached the century landmark with a six, one of seven in an innings embellished further with 12 fours off 170 deliveries.

Such was the left-handed wicketkeeper-batsman’s dominance of the latter stages of his team’s innings that Anrich Nortje was kept off strike for long periods and contributed just seven runs in a ninth-wicket stand of 79 that left the home players looking thoroughly deflated on the field.

“I knew it was important not only to get going at the start of the day but also to build partnerships to give ourselves a healthy lead,” said de Kock in reflecting on his first Test century for 20 months.

“I really haven’t changed much about my batting, with or without the captaincy, and it came off for me today.”

After enduring de Kock’s assault, West Indies’ mood worsened in the final session with Kagiso Rabada and Nortje taking two wickets each to reduce them to 51 for four.

However, Roston Chase and Jermaine Blackwood hung on to the close to give their struggling side hope of putting up a more concerted fight on the third day.

South Africa exerted control of the day from the start of play and only tightened their grip on the match thereafter.

De Kock led the way as 77 runs came in the first two hours for the loss of just one wicket when former captain Jason Holder induced an outside edge from the bat of Rassie van der Dussen and Shai Hope held the catch at gully to end the right-hander’s innings at 46.

Quick wickets after lunch lifted West Indian spirits but that proved a brief respite with Nortje steadfast in partnership with the rampant de Kock.