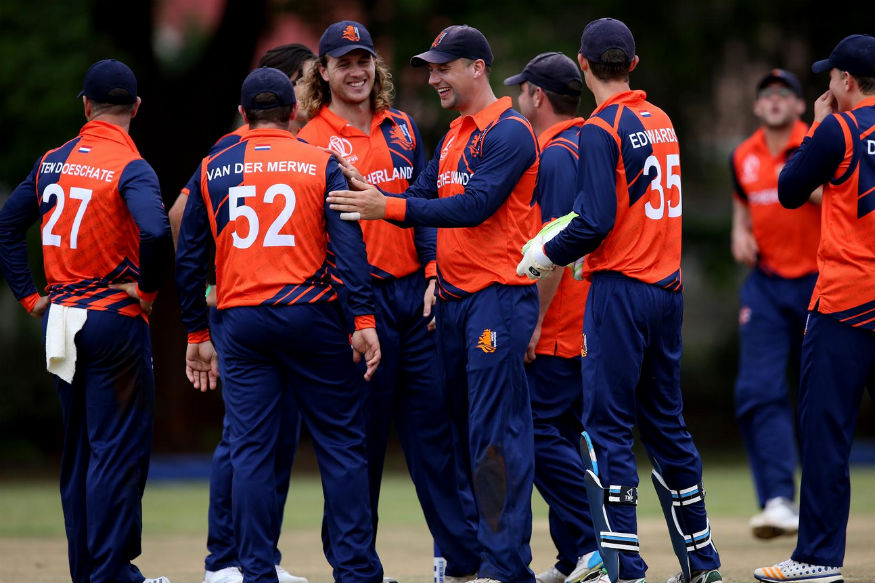 In what is likely to be the last edition of the T20 World Cup Qualifiers, Netherlands lifted the trophy in what was their third appearance in finals of the tournament’s six editions. Having shared the title twice – first with Ireland in 2008 and then with Scotland in 2015 – Netherlands could lay sole claim to the Cup at the end of the summit clash of the 2019 event following a clinical performance against Papua New Guinea at the Dubai International Cricket Stadium on Saturday (November 2).

Roelof van der Merwe (2-15), Timm van der Gugten (2-18) and Brandon Glover (3-24) led a disciplined performance with the ball as the Dutch restricted PNG to 128 for 8. Netherlands then rode on solid contributions from Ben Cooper (41), Ryan ten Doeschate (34*) and Colin Ackermann (29*) to get over the line with seven wickets in hand and an over to spare.

The chase began with Tobias Visee striking two fours off Nosaina Pokana in the opening over but the bowler had the last laugh in the contest as he outfoxed the opener with a slower one. Ben Cooper and Max O’Dowd didn’t attempt anything flashy during the powerplay as they were happy to take the singles and twos that were on offer. But Cooper did put away the loose deliveries, managing three boundaries within the first six overs. They put on 37 runs for the second wicket before O’Dowd was early into his shot against Vala and ended up chipping the ball to midwicket to depart for a 19-ball 14.

Cooper, meanwhile, went about his innings in a smart manner, managing timely boundaries – including a couple of sixes – to not let the required rate get out of control, with Ackermann providing him good support from the other end . However, Cooper’s outing came to an end in the 13th over when he failed in his placement of his shot off a short delivery from Damien Ravu.

The equation was 38 off 30 when Ryan ten Doeschate struck a four and a six off successive deliveries from Ravu in the 16th over and managed another maximum off Pokana to bring it down to a run a ball at the end of the 17th. He followed that up with a four off Norman Vanua before hitting the winning six off Pokana off the last ball of the penultimate over.

Earlier, opting to bat, PNG suffered early setbacks as they lost three wickets inside the powerplay. Tony Ura fell in the opening over to Roelof van der Merwe, trapped in front by an arm ball. Lega Siaka managed three fours in the fourth over off Colin Ackermann, who in the sixth over also put down a catch to offer Siaka a reprieve. However, wickets were falling at the other end as Assad Vala was run out while Charles Amini’s attempted loft off Timm van der Gugten ended up in the batsman being dismissed for nought.

Siaka and Sese Bau tried to steady the innings, mixing caution with aggression as they added 43 for the fourth wicket. However, just when things were looking up for PNG, they weren’t able to capitalise in the last few overs as they kept losing wickets at regular intervals – from 73 for 3 in the 12th over, they slipped to 102 for 7 at the end of the 18th with Glover bagging three wickets. Jason Kila provided some semblance of respect to the total by striking two fours and two sixes in the final over off Paul van Meekeren, although it didn’t make much of a difference in the end.

Ahead of the first Test, Boult expresses eagerness to dismiss ...