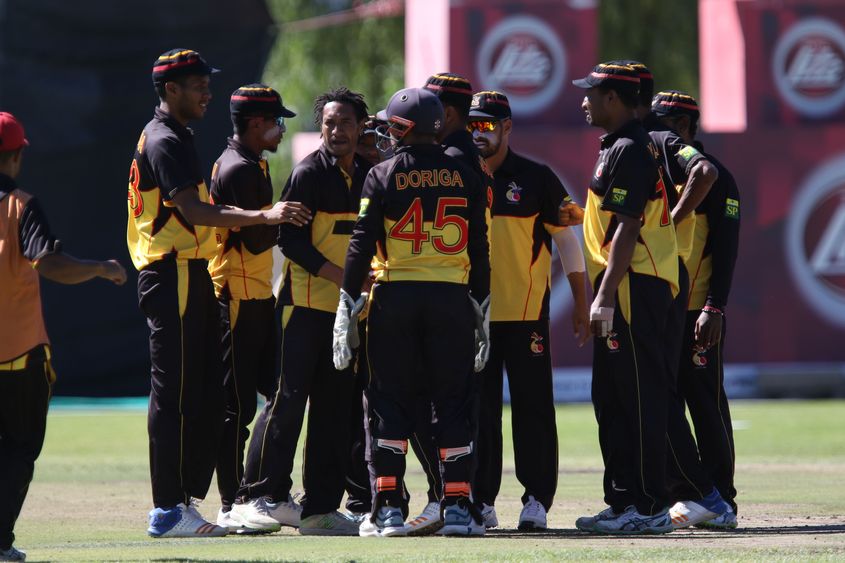 A near-faultless effort in the field from Papua New Guinea saw them smother a struggling Namibian chase to defend 130 and win by 18 runs in the second semi-final of the T20 World Cup Qualifier this evening in Dubai, to set up a clash with the Netherlands in the final of what may be the last edition of the event.

On probably the toughest batting wicket of the tournament so far, PNG were able to post what in retrospect proved a competitive 130-5 thanks to a battling 50 partnership between Sese Bau and Charles Amini through the middle overs, and a late cameo from Norman Vanua, who came in for the last four overs to hit a brisk, and ultimately crucial 20 off 13. Namibia’s reply would be stifled from the off by disciplined bowling and electric fielding, and wilted altogether toward the latter stages, without a single boundary being struck in the final six overs until the final ball of the game, by which time 24 runs were still lacking.

Namibia initially looked in strong shape as the PNG top order struggled to find fluency in the conditions after winning the toss and electing to bat, Tony Ura fell victim to what – in a competition that has seen some outstanding grabs – must surely be frontrunner for catch of the tournament, a lofted drive off Smit looking to have comfortably cleared the infield only for Erasmus to tear back and in from mid off, dive full length, and take an impossible, flying reverse-grip catch as the ball sailed over his shoulder.

The catch seemed to set the tone as Namibia kept the pressure on. Asad Vala skied a pull off Christi Viljoen to deep fine leg into the hands of opening bowler Ben Shikongo. Erasmus rewarded Shikongo by bringing the quick back for a rare second over in the powerplay, and Shikongo would repay his skipper’s faith with the wicket of Lega Siaka, who was rushed by pure pace on a hip high pull and shanking the ball up to Davin at deep backward square.

At 32-3 after the powerplay, some retrenchment was called for, but hard running and deft shot selection meant Charles Aminia and Sese Bau would pick off the runs that were on offer as the spinners toiled in the evening heat. They looked to kick on from the 14th over, and despite Amini walking past a wider delivery from Erasmus to be stumped for 31, the intent remianed clear. Kiplin Doriga launched Scholtz for the second six of the innings on the fifth ball of the fifteenth, getting to the pitch and putting it away over midwicket. The third came three balls later as Sese Bau slammed Craig Williams’ second ball hard and flat in the hoardings wide of long on, as the pair brought up PNG’s hundred on the final ball of the 16th.

JJ Smit’s return for the 17th nipped the nascent acceleration in the bud however, as Doriga slapped a wider delivery high and straight into the hands of Erasmus at long off, and depsite Vanua’s effort the Namibians would have the best of the death, Christi Viljoen conceding just four runs from the final over to hold PNG to just 130-5 from their 20 overs.