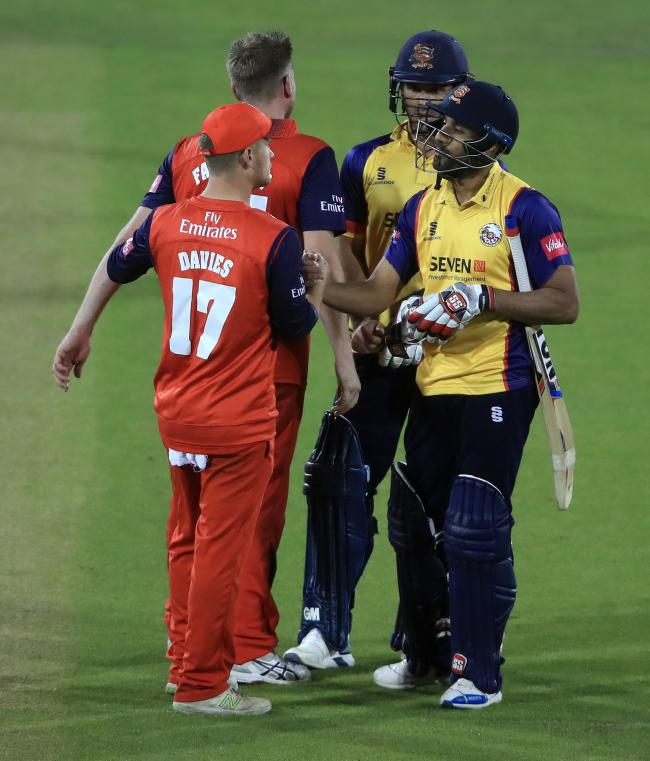 It was a day of rollercoaster emotions for Worcestershire. First, they had all but lost the semi-final against Nottinghamshire before somehow winning it on the last ball. Then in the final , they were in charge before Ravi Bopara and then Simon Harmer broke their hearts late on, snatching away the chance to become the first team to win back-to-back Blasts. Two topsy turvy games in a season which has produced more than its fair share. For Worcestershire though, this defeat will hurt like hell.

Essex needed 49 runs from the last five overs on a wearing pitch. It looked unlikely they would get close, particularly as Moeen Ali and Pat Brown, the two best bowlers on the day, had to bowl three of the remaining overs. Scoring had been tough all day and got harder as it wore on. Worcestershire were in the box seat but some inspired hitting from Bopara and Harmer saw Essex over the line in the most dramatic of circumstances.

Unlike the implosion by Notts which allowed them to get through to the final, this was no choke from Worcestershire. They made a good score and bowled and fielded as if their lives depended on it. “I’m disappointed with the defeat, obviously, but not too disappointed because I thought we played really well there,” Moeen said. “Ravi was outstanding, in my opinion he won them the game. His experience showed. I’m just disappointed with the result.”

It was a measure of the strength of character of Moeen’s team that they even got this far. They were indifferent in the group stages, winning six matches and losing five, before a brilliant individual hundred from their captain saw off Sussex in the quarter-final. They scraped through the semi-final despite being below their best for much of the game and then couldn’t quite muster enough to put Essex away in the final. Ever gracious, Moeen admitted his side “got away with it a little bit” against Notts and that Essex deserved to win the final.

The reason they almost got over the line was to do with Moeen’s own bowling and that of 21 year-old Pat Brown. In the final, Moeen conceded just 22 runs from his four overs and took the important wickets of Dan Lawrence and Ryan ten Doeschate. Brown bowled at crucial times and held his nerve. “He’s got huge potential and he’s going to get better,” Moeen said of Brown. “Ravi was the first guy who actually played him really well. He’s got huge potential. He’s a gun fielder, he loves the big pressure times and he’s very confident in himself.”

Even with one ball remaining, after Essex had got their noses ahead, Worcestershire could have won with a dot ball. It was the exact same situation they faced in the semi-final. Wayne Parnell to bowl. A dot to win. Except Parnell had been hit for four the previous delivery by Harmer and it seemed to hit him hard. He looked distraught.

“I told him ‘you’ve done it before so you can do it again’,” said Moeen. “In my opinion, his body language showed that he was almost resigned to losing. I still think you can win those games because it’s not easy, actually, when you need one to win, to try to belt it. If you try to go over the top you might get out. I think he was already resigned to losing.”

Despite their defeat, Moeen thinks the future looks bright for Worcestershire in T20 cricket after two successive final appearances. “I think we are one of the best sides in the country and I think we will be back here next year,” Moeen added. “We have a great core of guys, players who win games.”