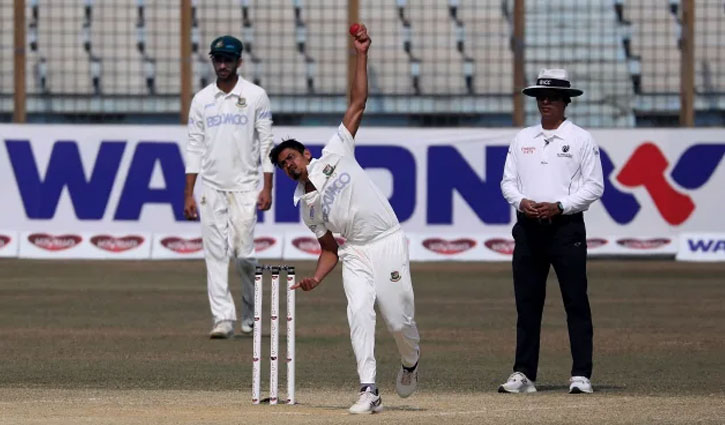 Bangladesh left-arm spinner Taijul Islam urged his teammates to be disciplined to take an upper hand in the opening Test against Sri Lanka, with hardly anything there for the bowlers in Pallekele. Bangladesh resumed the third day on 474 for 4, and added vital runs before declaring their innings for 541 for 7 thanks to Mushfiqur Rahim’s unbeaten 68 and Liton Das’s 50, but Sri Lanka’s skipper Dimuth Karunaratne scored an unbeaten half-century for a befitting reply as Sri Lanka ended the day on 229 for 3 on Friday (April 23).

Karunaratne remained unbeaten on 85 as Sri Lanka ended the day trailing Bangladesh by 312 runs. “On this pitch which doesn’t have much help for the bowlers, we have to be very disciplined to get near a winning position. We have to cut down the runs and get wickets early tomorrow. We will definitely play to win but we also don’t want to lose control at any stage,” Taijul said. “The rough areas aren’t producing a lot of sharp turn in any direction. It is generally a slow wicket. We just have to be disciplined and prey on the batsmen’s weakness.

“The wicket is still good to bat as I’ve already said, so we need to bowl with disciplined lines according to the fielding protections. We’d obviously play to win, and we’d keep in mind, that ,” he said that they decided to go against taking a review against Lahiru Thirmamanne during the 34th over’s play as he felt the ball turned big, though TV replays showed he was out.

“Actually that ball turned a lot, and it seemed that it would miss the stumps, that is why I was confused, and as losing a review at that point would have been a huge setback for us,” he said.

Taijul welcomed the decision of playing five bowlers – Taskin Ahmed, Abu Jayed, Ebadat Hossain, Mehedy Hasan and himself – as it helped them to have proper rest in the heat. The decision to play five bowlers was quite a surprise considering Bangladesh usually are inclined to play seven, and at times, eight batsmen in their playing XI in Test cricket.

“It’s humid conditions over here, so it’s an advantage for us if we use five bowlers for a Test match which helps the team. It helps me rest in the meantime, which also serves for the bowlers to make a comeback,” said Taijul, adding that he was quite impressed with the way Taskin bowled after making a comeback to Test cricket after four years.