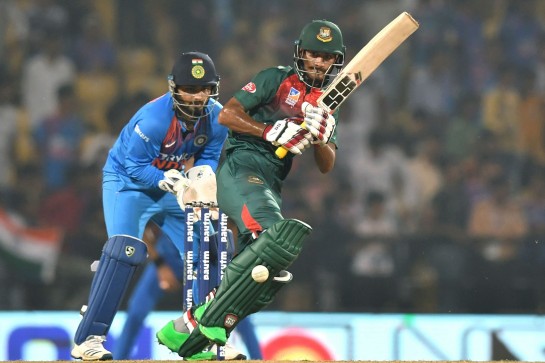 Bangladesh prodigy Mohammad Naim Sheikh is not thinking too far ahead despite the growing buzz around him following a promising show in the T20 series against India. The 20-year-old failed to translate his starts in the first two games (26 in Delhi and 36 runs in Rajkot) but showed his batting prowess with a sublime 48 ball-81 studded by 10 fours and two sixes in the series decider.

Mohammad Mithun and Naim stitched the highest T20 partnership for Bangladesh against India as the duo added 98 runs for the third wicket before India stormed back into the context after prizing out Naim. “It is highly disappointing [not to win the series],” Naim told reporters at Nagpur on Monday (November 11). “It [the innings] would have felt better if we had won the match but as we could not win the series there will always be regret for that.

“If we could set another partnership then we could have won the match. We [me and Mithun] were discussing that we had to end the innings. It should not go down the order [but unfortunately we failed].”

Naim finished as the highest scorer in the three-match series scoring 143 runs at an average of 47.66 and repaid the faith of the national selectors, who picked him after veteran Tamim Iqbal ruled himself out from the tour. The youngster admitted the series, and the final T20I in particular, was a massive learning curve in his fledgling career as he also received high praise from the likes of Harbhajan Singh and BCB president Nazmul Hasan.

“It was a learning curve for me because we played in different wickets and I tried to adjust to it,” he said. “The debut game was something to remember because we had won the match, I felt very good for that. I am not thinking like, ‘I have made a lot of runs’ I don’t think about it [that way] because I like to play match to match. I am not looking too far ahead,” he said.

“The board president [Nazmul Hasan] congratulated me while Harbhajan told me that if I was there in the wicket we could have won the match. Hearing all these things is inspiring but at the same time it does not make me very excited as we did not win the match,” he said.

The India series is the latest in Naim’s rapid rise as a cricketer. He burst into the spotlight in last year’s Dhaka premier league finishing as the tournament’s highest run getter (807 runs from 16 matches). It brought him into the national contention with selectors looking to rebrand the country’s T20 team. He was included in the last Twenty20 tri-nation series at home when Bangladesh hosted Afghanistan and Zimbabwe.

“It is a good sign for Bangladesh cricket that Naim Sheikh has scored some runs. He was getting prepared for the last two years in High Performance squad,” said selector Habibul Bashar.