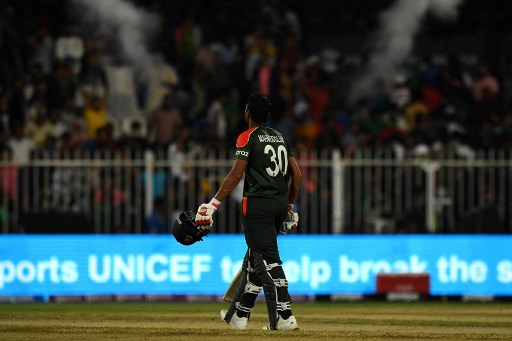 Bangladesh captain Mahmudullah believes Liton Das’s dismissal in a nervy chase cost his side against West Indies on Friday. Bangladesh’s chances of advancing to the last-four look all but over as they lost a final-over thriller against West Indies by three runs in Sharjah, slumping to three defeats in as many fixtures.

Das made 44 off 43 balls and Mahmudullah remained unbeaten on 31 off 24 balls and the duo looked all set to bring them their first points in the group stage before it slipped away from their hands after the former was caught right at the boundary line at long on by Jason Holder.

“I think we were batting well at that stage. The partnership with Liton was going well, but had his shot off Bravo’s last ball gone for six instead, it would have put us in a better position. It was a big turning point, since Liton was set. I think two set batsmen in the last over could have given us a six or a four,” Mahmudullah told reporters after the game.

“I think we were in the game till Liton got out in the 19th over. I thought it went for six but there’s a big advantage in having a really tall fielder in the outfield, who can catch. I think it was a crucial moment of the match. You will have these close calls in T20 games, but unfortunately we couldn’t win today. We needed both Liton and I in the last over but having said that, Russell nailed his yorkers quite well,” he said, while also taking the blame for not finishing the game by himself.