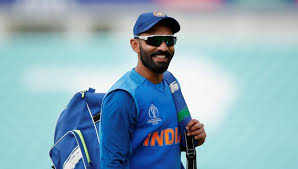 Dinesh Karthik, who has been out of India’s limited-overs squads since after the 50-over World Cup in England and Wales, is hoping to take the finisher’s route back to the national T20I side. Karthik has been in stellar finishing form for Tamil Nadu in the ongoing Vijay Hazare Trophy 50-over tournament, and with the men’s T20 World Cup scheduled to be played in Australia late next year, he feels he has hit the right zone to do the job MS Dhoni used to do.

“It’s [The T20 World Cup] a year away but if I feel I can keep performing and have a good [domestic] tournament, I’m sure I will go out there and play,” Karthik, 34, told ESPNcricinfo ahead of the Hazare knockouts. “Because, I feel it’s a key part that the Indian team is looking out as well – closing out matches and have someone who can understand those situations and do the best at that point of time.

“And I feel I’ve done that in the short time I’d played T20s [for India]. But, post the World Cup, I didn’t play; they clubbed it [poor run at the World Cup] with the T20 part of it and removed me from the team as well. But I feel that I’m well-suited to play that role Dhoni has played for so many years now. I feel I can do something like that and I’ve been doing that for KKR and Tamil Nadu. So, if a slot opens up there, that’s something I’ll be really looking forward to. The T20 World Cup is definitely something I’d want to play.”

Bowling workload prevents Jason Holder from moving up the order