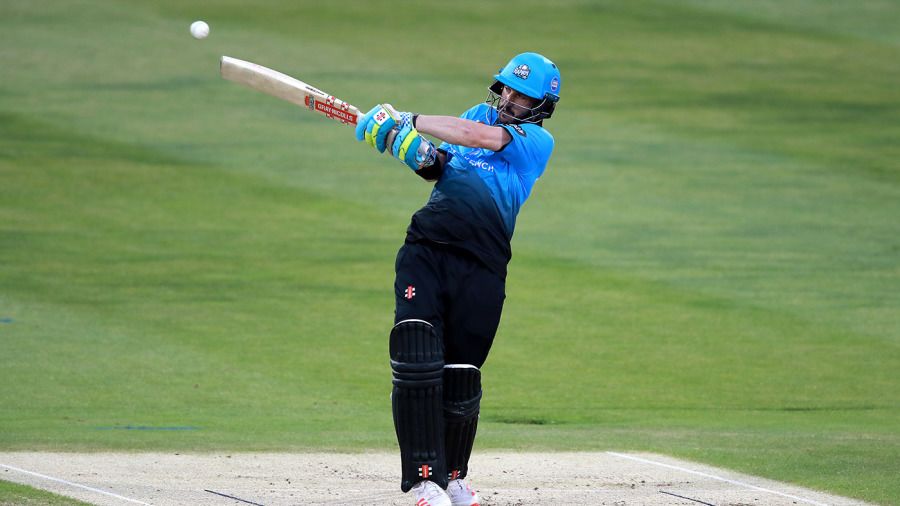 Hamish Rutherford‘s first half-century of the Vitality Blast helped Worcestershire to just their second win of the tournament and heaped more pressure on Northamptonshire’s stalling campaign in an eight-run victory at Wantage Road.

Rutherford’s 62 in 37 balls underpinned Worcestershire’s 178 for 6 before Northamptonshire were held to 170 for 7 having been 82 for 2 after eight overs.

It was a third consecutive defeat for Northamptonshire following a positive Covid-19 test among their squad. The disruption to their selection and practise has stopped a flying campaign in its tracks. They had won their first four completed matches.

They now need at least one win from their remaining games at Taunton and Edgbaston to have a chance of qualifying for the quarter-finals.

Their defeat here ensures Gloucestershire, who won a sixth straight T20 earlier in the day, qualify for the knockout stage for the fourth time in five years.

Worcestershire, champions of 2018 and finalists last season, were already unable to qualify after winning just one of six completed fixtures but found solace on Tuesday.

They looked to be cruising to victory after Ed Barnard, whose four overs claimed 2 for 15, and Daryl Mitchell, 1 for 17 from his three, had strangled the chase to leave 52 needed from the final four overs.

But Adam Rossington swung Charlie Morris over the midwicket fence, charged at Pat Brown and pulled another boundary before edging four more to leave 29 from the final 12 balls.

Saif Zaib then lifted the first two deliveries of the 19th over through the off-side for four and it left Brown 16 to defend from the final over.

After conceding only four in three balls, Rossington was run out trying to retain the strike and the hosts’ daring comeback was ended.

Northamptonshire had been well ahead of their chase after Richard Levi slammed a 27-ball fifty. He took 22 from the second over bowled by Dillon Pennington. Three times he swung to leg and three times cleared the infield for boundaries before the final ball of the over was hoisted over long-off. Levi added a second six over the head of Morris. Brown was then pulled and flicked for boundaries in the final over of the Powerplay.

But two balls after raising his first T20 fifty since 2018 he crashed Barnard to point and it caused a critical slide. Rossington’s 45 in 34 balls was too late.

It rendered Rutherford’s effort a match-winning innings, albeit too late for Worcestershire’s chances of reaching the last eight. He had previously made four scores above 20 this season but no match-defining score.

He cut and drove Josh Cobb for boundaries in the opening over of the game before flicking Nathan Buck over deep square for the first six of the match. His second maximum, over midwicket off Brandon Glover, brought fifty up in the fifth over.

Rutherford then cut and scooped Buck for consecutive fours in his second over before he skipped down to smash Zaib over his head for a third six to reach fifty in 30 balls.

He steered White over cover – one of only two boundaries the left-arm spinner conceded in his fours overs that cost 29 – and carved Buck past point. But trying to whip the same bowler to leg was held on the deep-backward square fence.

Rutherford and Jack Haynes gave Worcestershire an excellent start, adding 58 in 33 balls for the first wicket. But they couldn’t kick on to a more demanding total and only took 44 from overs 14 to 19.

Mitchell and Ross Whiteley struck boundaries in the last over and in the final counting, they proved the difference.