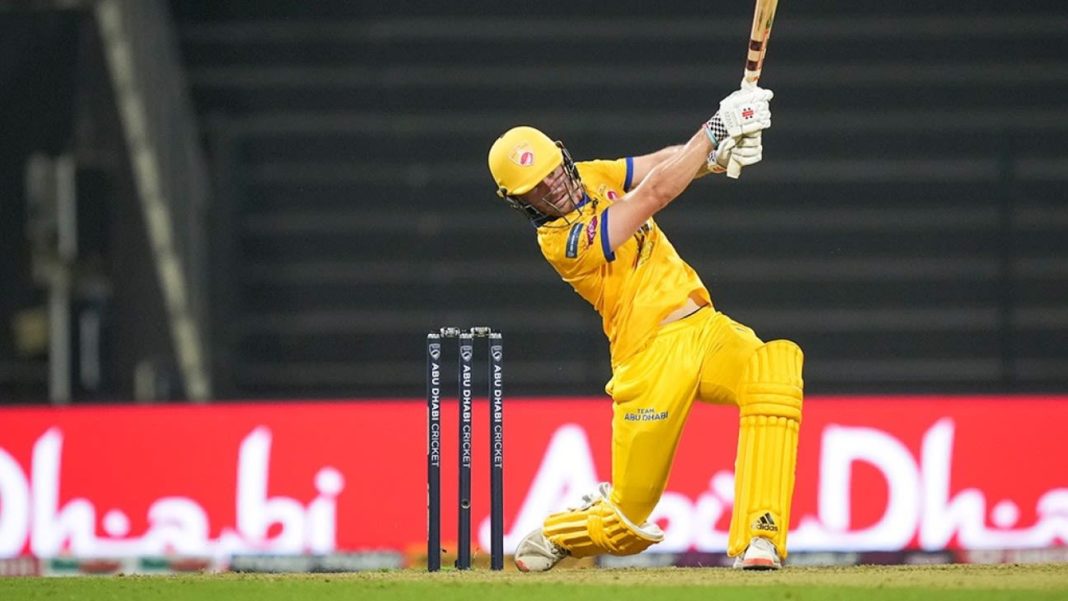 It’s been a bit of a rollercoaster year for Phil Salt. After breaking his foot in a freak cycling accident before the start of the County Championship, he made the most of his brief opportunity to play for England for the first time over the summer. The powerful opening batter, however ended the 2021 domestic season without playing a red-ball game, before leaving Sussex to join Lancashire.

Now with successive knocks of 63* off 28 and 56 off 23 for Team Abu Dhabi, Salt is finishing off his campaign in style, showcasing his fearlessness and class at the top of the order.

After a player-of-the-match performance against the Chennai Braves on Monday, again Salt was the star for Liam Livingstone‘s side as they pulled off another last-ball win.
Chasing 122 against Delhi Bulls, he helped set the platform with an innings that included three fours and five sixes, before Jamie Overton, with 20 off five, smashed Dwayne Bravo for two sixes from the last two deliveries to make it five wins out of five for the Abu Dhabi outfit.
In a side filled with renowned hitters like Livingstone, Chris Gayle and Paul Stirling, Salt has been the top scorer thus far for Team Abu Dhabi with 157 runs in five T10 innings, hitting 11 fours and 13 sixes, and striking at rate of 200+.

Salt described the mood in the Team Abu Dhabi camp as “brilliant”.

“We’ve got coaches that back us to the hilt and we’ve got a great group of lads that also back each other to the hilt, so as a player there’s not much more you can ask for,” Salt said.

He and skipper Livingstone had got the equation down to 37 off 18, before both were dismissed by Dominic Drakes. Yet, such is the depth of their batting line-up, that it was left to none other than Gayle and Overton to take them home.

No side had chased 18 in the final over of a T10 game, and when Gayle was run out with ten needed off two, it looked like it would be a first defeat for Team Abu Dhabi.

But Overton ensured that their unbeaten run went on, by slogging Bravo over the sight screen then dispatching a slower ball over long-on for six more. He even had Gayle jumping out of his seat at the end.

“If I was to get greedy, I’d say that I wanted to be out there at the end tonight, but I had to take the punt I did when I took it and Jama [Overton] played a great knock and won us the game,” said Salt.

Paul Farbrace spoke earlier in the week about how far Salt’s keeping had come after working with Sarah Taylor, and Overton mentioned how well Salt has been striking the ball in the nets. “To be honest, the first net session I bowled to Phil I was like, ‘jeez, this guys in serious form’,” Overton said.

The 25-year-old Salt joined Lancashire at the end of the season but his former Sussex teammate, Luke Wright, was full of praise for the man with whom he opened the batting at Hove. Unfortunately for Wright, making his first appearance since Finals Day, he was on the other end of a scintillating knock from Salt at the Zayed Cricket Ground.

“I picked him out of the academy to come and open the batting with me years and years ago, so it’s great to see him develop the way he has and obviously he’s added the keeping to his game,” Wright said. “He’s hugely dangerous and he can strike sixes from ball one.

“In this format of the game, if you don’t get it right, he’s going to punish you. It’s nice to see him continue developing. We were sad to see him leave Sussex obviously, but he’s a good player and hopefully one day he’ll be playing for England.”

Salt’s appearances for England so far have been limited to three ODIs after a covid outbreak meant that a replacement squad had to be called up in the summer for the series against Pakistan and his brutal half-century at Lord’s, which included ten boundaries, was good enough to pass a Jason Roy impression contest.

England’s white-ball depth is such that the line of top-order batters is long and filled with talent such as Roy, Jos Buttler and Jonny Bairstow, but Salt is doing a fine job of showing he is ready to seize another opportunity, if it comes along.