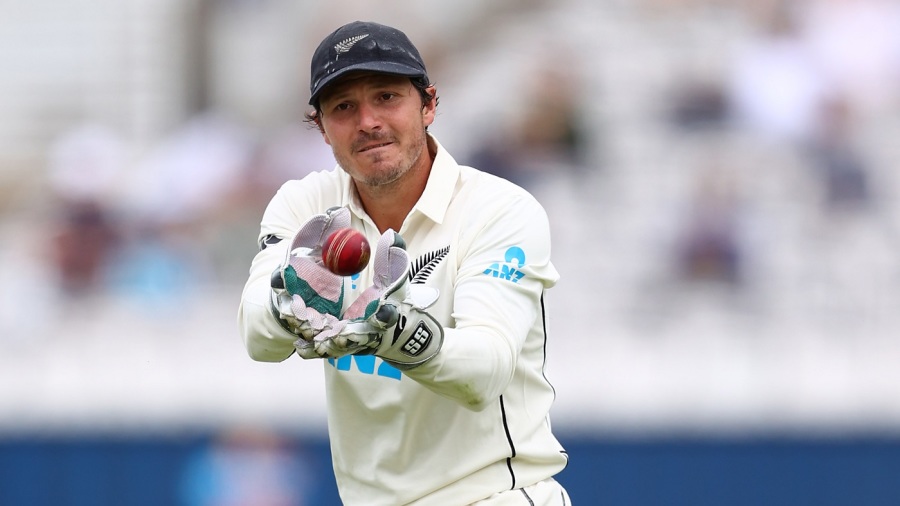 Welcome to day one of our live report of the second Test between England and New Zealand from Edgbaston. Join us for updates, analysis and colour. You can find our traditional ball-by-ball commentary here.

* Most recent entry will appear at the top, please refresh your page for the latest updates. All times are local

5.55pm: Lawrence brings up his fifty

Olly Stone falls after a valuable partnership with Dan Lawrence worth 47. Stone was trapped lbw for 20 trying to sweep Ajaz Patel but he provided some stabilty to a wobbling England innings. Lawrence is also digging in nicely as he eyes his half-century.

Trent Boult removes Rory Burns and James Bracey with consecutive balls. England are in all sorts of bother.

A golden duck for James Bracey to follow a duck at Lord’s https://t.co/qQc1V6pQCg | #ENGvNZ pic.twitter.com/EQJVbo4lxH

England go four down as Ajaz Patel accounts for Ollie Pope, caught behind by Tom Blundell for 19. This has been an excellent session for New Zealand – and it’s not over yet.

Rory Burns brings up England’s 100 with a lovely drive through cover point off Matt Henry to lift England’s spirits after a post-lunch slump that saw them lose Dom Sibley, Zak Crawley and Joe Root in quick succession. Burns, a centurion in the first Test, is not out 49 and Ollie Pope is unbeaten on 10.

Crawley’s poor run continues, caught at third slip off Wagner for a duck!

Matt Henry makes the first breakthrough after the lunch break!

It wasn’t a run-feast but Sibley and Burns navigate their way to lunch without incident. Their unbroken union of 67 is England’s highest opening stand in the first innings of a home Test since 2009, our statastician Sampath Bandarupalli informs us.

Dom Sibley brought up England’s fifty with a four through sqare leg off Daryl Mitchell. Sibley has now moved on to 31 not out with Rory Burns unbeaten on 28. Our stats legend Shiva Jayaraman points out that this is England’s first fifty-run opening stand in the first innings in 14 home Tests. Their previous one was between Alastair Cook and Keaton Jennings against India at The Oval in 2018!

Don’t know about you, but the roar of the crowd for each boundary – Dom Sibley and Rory Burns have struck two fours each – is giving me chills after so long without hearing the sound of full-ish stands. Some 6,700 fans attended each day of the first Test at Lord’s but there’s more than double that at Edgbaston. Imagine what it feels like being there. Our man on the ground, Matt Roller, knows and sent us this:

This is the second-biggest sporting crowd that has been seen in the UK since the start of the pandemic, behind the 20,000 or so who attended Leicester City’s win in the FA Cup final at Wembley last month, and the largest attendance for a home England fixture since the fifth Test of the 2019 Ashes.

Edgbaston is perhaps the perfect venue for the fans to return from England’s perspective: the players talk glowingly about the atmosphere here, from the notoriously raucous Eric Hollies Stand in particular, and their record in Birmingham is very good – or at least it was, until Australia ended an 11-match winning streak across formats in the first Test of the 2019 Ashes.

There are around 17,000 fans in the crowd, all of whom were required to take a lateral flow test in the 24 hours before the start as part of a government pilot event (though no Under-16s, who were deemed unable to give medical consent), with loud cheers for every boundary, an ironic jeer when Matt Henry’s first over contained a wide, and – hearteningly – a warm applause during the ‘moment of unity’ before the start. There’s plenty of fancy dress on show and hundreds of pints have already been poured – let’s hope the ominous grey clouds rolling across the ground don’t ruin the fun.

How young he looks! James Anderson, who turns 39 in July, says he can rememeber “as clear as anything” making his Test debut as a 20-year-old back in 2003. But does he remember getting those frosted tips done? Here’s what he had to say to Sky Sports this morning about playing his 162nd Test to overtake good friend Alastair Cook as England’s most-capped player:

“I spoke to him [Cook] last night, he rang me last night to congratulate me. It’s incredible that someone like him who I look up to so much and have so much respect for, that I’m actually going past him.

“I can remember that as clear as anything, my debut, and then some amazing memories all the way through that period and I can’t believe that I’ve got to where I have today.

“I think a lot of it is luck, I’ve been born with a body that can cope with the pressures of bowling. I do work hard on my fitness, and I think it’s try to stay hungry, I still feel like I’ve got a lot to feel like I’ve got a lot to give the game. I feel like I can still take wickets. It’s about just turning up every day and having that hunger to improve, to get better, whether it’s your fitness or your bowling skills, and I think I’ve still got that, and that’s probably helped me throughout the years and hopefully that will help me carry on for a little bit longer.”

It’s an Australian folk band, it’s an Aussie beer but it’s not about Australia, it’s about all about England and New Zealand as the hosts win the toss and choose to bat first. Joe Root reckons: “It looks a brilliant pitch. Generally the wicket’s good here, we want to make good use of that first.”

New Zealand, meanwhile, have made six changes! Some of those are forced with Will Young in for Kane Williamson, who has a sore elbow, and Tom Blundell taking the gloves for injured keeper BJ Watling. Daryl Mitchell, Matt Henry, Ajaz Patel and Trent Boult also come in.

Hello, and welcome to our coverage from the opening day at Edgbaston. We have some news for you first up, with New Zealand revealing that wicket-keeper BJ Watling is a late withdrawal after failing to overcome a sore back. The injury has troubled Watling in the past and although it has improved over the past 24 hours, it hasn’t improved enough for him to be confident of making it through a full Test behind the stumps. As a result, Tom Blundell will take the gloves and bat at No. 6 in his 11th Test.


Valkerie Baynes is a general editor at ESPNcricinfo