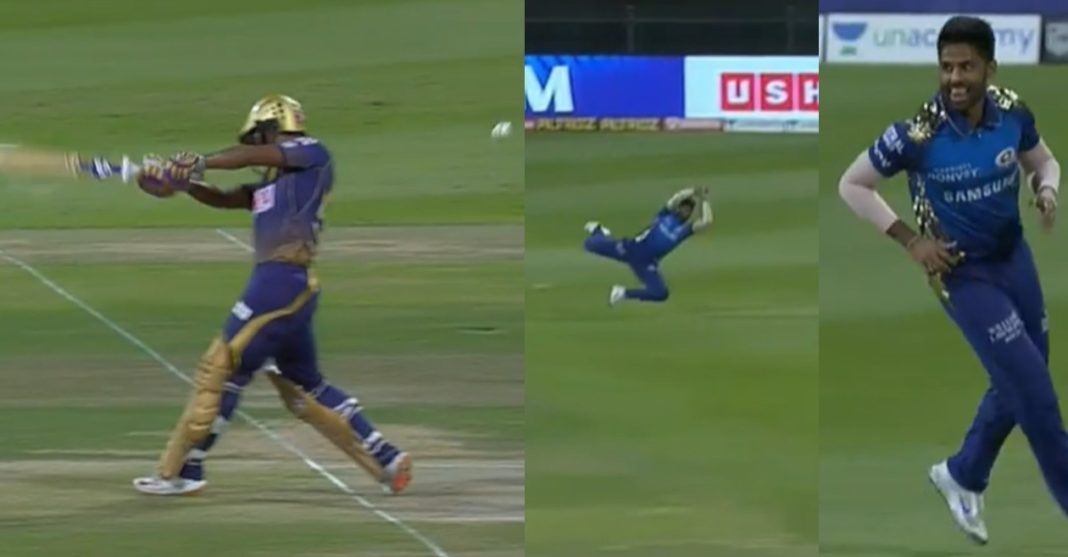 MI have won six out of eight games and currently heading the points table with a net run rate of +1.353.

During the match, newly appointed KKR captain Eoin Morgan won the toss and decided to bat first in Abu Dhabi. KKR sent in Shubman Gill and Rahul Tripathi to open the batting.

In the third over of the innings bowled by Trent Boult, Tripathi tried to cut the ball through the square region, but an excellent flying catch by Surya Kumar Yadav dismissed the KKR opener.

It was a short delivery wide outside the off stump. Tripathi saw the opportunity and slapped it hard. It was in the air and to the left of the point. Surya threw himself and took an absolute screamer.

The outstanding effort stunned the bowler and even forced MI’s coach Mahela Jayawardene to stand up in the dug-out and applaud the beauty.

Whoa! 😮
A sure contender for the ‘catch of the tournament’… and going by those reactions, could be a winner👌#Dream11IPL #CricketYourWay #MIvKKR #IPL2020 pic.twitter.com/pzhGPD5SYr

KKR posted 148/5 on the scoreboard, thanks to Pat Cummins, who top-scored with an unbeaten 36-ball 53 and skipper Morgan, who made 39 not out off 29 balls. The top-4 batters of Knight Riders (Tripathi, Gill, Nitish Rana, Dinesh Karthik) together scored only 37 runs.

In reply, MI chased down the target in 16.5 overs. Quinton de Kock smashed a blistering knock of unbeaten 78 runs, studded with nine fours and three sixes. He was well supported by skipper Rohit Sharma (35). The pair added 94-runs for the opening wicket to take the game away from Knight Riders.

It was the third-highest score for De Kock in IPL and second while playing for MI. His best knock came in 2016 when the wicket-keeper batsman was a part of Delhi Capitals (then Daredevils).