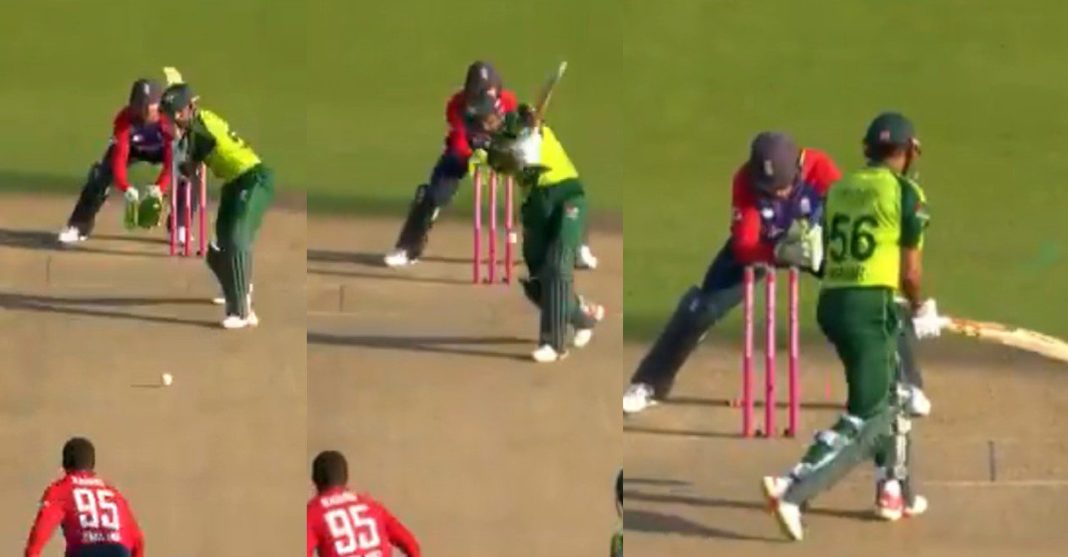 The third and final T20 International (T20I) of the three-match series between England and Pakistan saw a wonderful display of spin bowling from Adil Rashid. The English leggie once again impressed everyone with his superior bowling skills against a quality batting attack of Pakistan.

On Tuesday, Rashid recorded his career-best figures in the shortest format of the game at the Old Trafford, Manchester to take his side to a stunning victory in the series decider. He bagged a four-wicket haul to dismantle the Pakistan batting unit.

During his sensational spell, Rashid bamboozled Pakistan skipper Babar Azam with a spectacular delivery. It all happened on the second ball of the sixth over when the leg-spinner went for a googly that deceived the batter completely.

Babar charged down the track early to play a fancy drive over the mid-wicket region, but he missed the line and length as Jos Buttler whipped the bails off in a flash to get rid of the second-ranked T20I batsman.

In the match, Pakistan, after opting to bat first, scored 154/6 in their allotted 20 overs. Mohammad Rizwan was the lone warrior in Pakistan’s innings. He carried his bat and smashed an unbeaten 76 off 57 balls, including five fours and three sixes. No other batter could manage to cross the 25-run mark. Fakhar Zaman was the second-highest run-getter with 24 runs from 20 deliveries.

In reply, the match went to the wire as England eventually chased down the target with two balls to spare. Opener Jason Roy top-scored with 64 off 36 balls, including 13 boundaries.

For the touring party, senior player Mohammad Hafeez turned out to be the most successful bowler. He bagged three wickets for 28 in his quota of 4 overs. With this win, England also sealed the series 2-1.