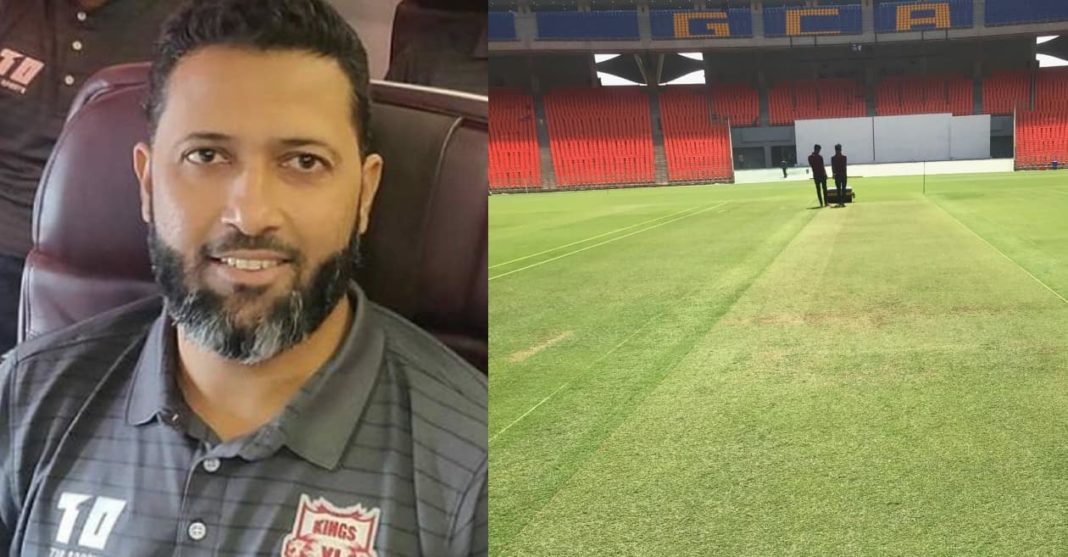 Former India international Wasim Jaffer is known for his hilarious and rib-tickling responses on social media. More often than not, he provides a dose of entertainment to fans with his unique and hilarious tweets.

Once again, Jaffer gave a glimpse of his sense of humour after having a look at the pitch of the upcoming third Test between India and England at Sardar Patel Stadium in Ahmedabad.

In the picture tweeted by the official handle of The Cricketer, one could see a lot of green grass on the track. Jaffer responded to the tweet by putting a photo of the character ‘Bauji’ played by actor Kulbhushan Kharbanda in the popular Indian web series ‘Mirzapur’.

The pitch used in the second Test at MA Chidambaram Stadium in Chennai was in the news after a few former England cricketers deemed it unfit for the red-ball format. The pitch at Chepauk offered assistance to the spinners right from Day 1 of the match.

England were unable to reach 200 in both the innings after being bowled out for 134 and 164. As a result, India won the contest to level the series (1-1). It was India’s biggest win against England (in terms of runs) as they defeated the visitors by 317 runs.

Former England cricketers like Michael Vaughan and David Lloyd came down heavily on the Chepauk pitch. However, the likes of Shane Warne were of the opinion that India played much better cricket than England, and the pitch couldn’t be termed poor. Both Rohit Sharma and Ravichandran Ashwin had scored centuries in the same match.

Just like the second Test, the third match, which is a Day/Night affair starting from Wednesday (February 24), will witness a limited number of fans in the stands. Though Motera stadium has a capacity of 1,10,000, due to COVID-19 restrictions, the Gujarat Cricket Association (GCA) has only allowed 50% of the capacity.