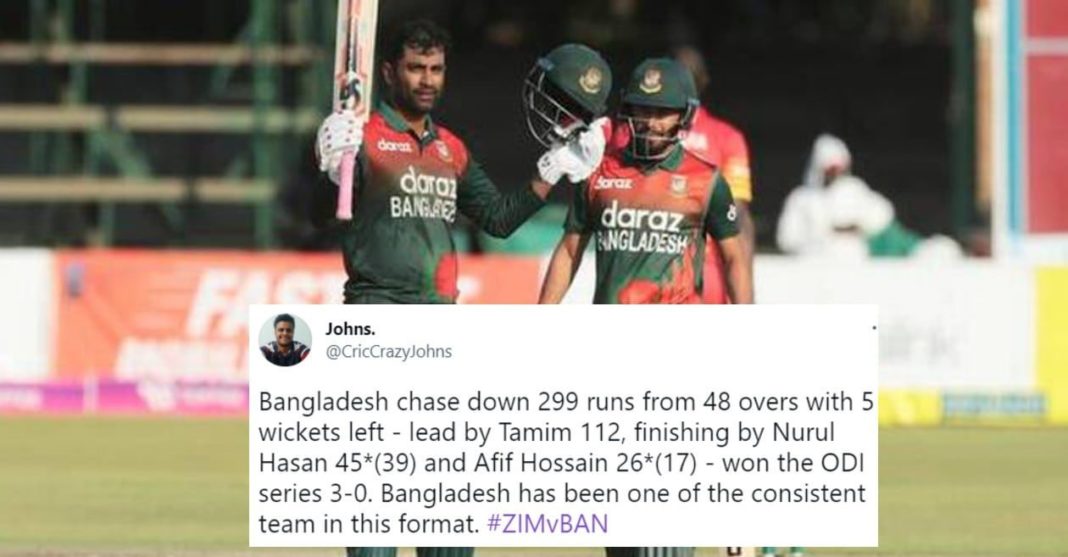 Bangladesh skipper Tamim Iqbal smashed a tremendous century in the third One-Day International (ODI) against Zimbabwe to help his side register a clean sweep in the three-match series at the Harare Sports Club on Tuesday.

Tamim scored 112 off 97 balls, including eight fours and three sixes, to guide Bangladesh over the finish line in their chase of 299. It was Tamim’s 14th hundred in the 50-over format.

For the hosts, Donald Tiripano and Wesley Madhevere picked up two wickets each. While Tiripano bagged 2 for 61 in seven overs, Madhevere took a couple for 45 runs in his quota of 10 overs.

Earlier, the Brendan Taylor-led side got bundled out for 298 in 49.3 overs. Opener Regis Chakabva was the star with the willow for Zimbabwe. He scored 84 from 91 deliveries with the help of seven fours and a maximum.

Similarly, Sikandar Raza and Ryan Burl also made valuable contributions down the order to help their side reach a competitive total. Raza made 57 off 54 balls, whereas Burl scored 59 from 43 deliveries.

For the visitors, Mohammad Saifuddin and Mustafizur Rahman were the pick of the bowlers as the duo bagged a three-wicket haul each. Saifuddin claimed three scalps for 87 runs in 8 overs. On the other hand, Mustafizur earned a 3-fer while conceding 57 runs from 9.3 overs.

They defeat Zimbabwe by five wickets and sweep the ODI series 3-0.

Hundred for Tamim Iqbal. His 14th ODI Hundreds in his Career. What a Innings played by Tamim in Run Chase. He scored 100* runs 96 balls including 6 Fours and 3 Sixes against Zimbabwe while chasing 299 runs. Well played, One of the Greatest Batsman for Bangladesh, Tamim. #ZIMvBAN pic.twitter.com/n3SGsufnXM

Bangladesh’s experienced batters led by Tamim Iqbal provided the foundation, and their inexperienced ones put a splendid finishing touch to their chase of 299!

Tamim Iqbal is close to 8k ODI runs .
can complete in next 2/3 series

Bangladesh chase down 299 runs and won the 3rd ODI match by 5 Wickets and also won the series by 3-0 against Zimbabwe. What a performance by Bangladesh. Tamim Iqbal played a brilliant innings in Run Chase. #ZIMvBAN

#3rdODI | 🇧🇩 win by 5 wickets and take the series

For latest cricket news and updates, subscribe to our Daily Newsletter.