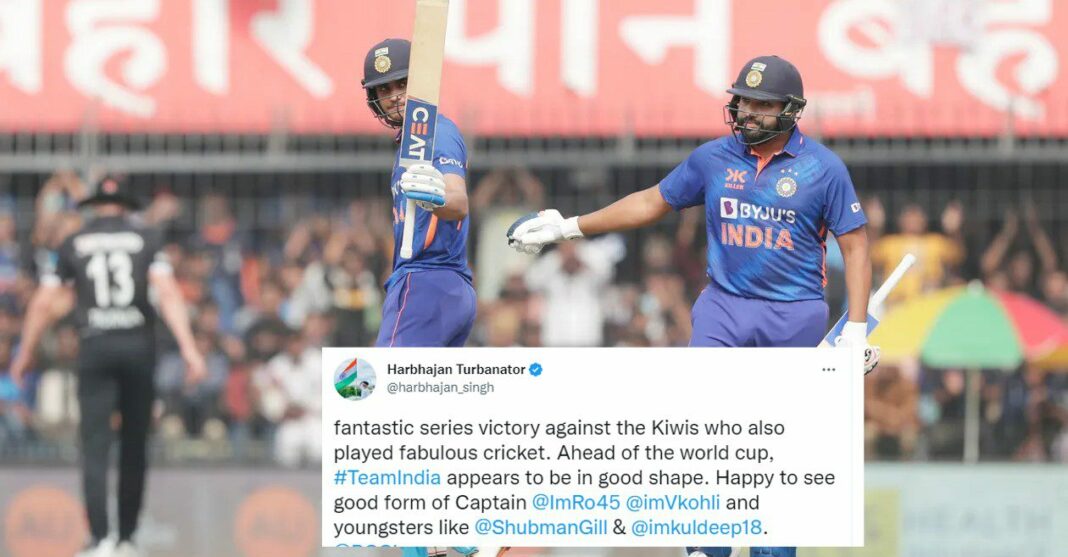 Team India defeated New Zealand in the third ODI and whitewashed the Black Caps in the three-match series at the Holkar Cricket Stadium in Indore.

The tourists won the toss and elected to bowl first, but the decision went terribly wrong, with India putting up a strong batting performance. The opening duo of Shubman Gill and Rohit Sharma completely dominated the proceedings, with both hitting their respective centuries.

While Gill smashed 112 off 78 balls with the help of 13 fours and 5 sixes, captain Rohit scored 101 from 85 deliveries, including 9 fours and 6 sixes. All-rounder Hardik Pandya provided the late flourish by slamming 54 off 38 balls, hitting 3 fours and as many maximums to take India’s total to 385/9 in 50 overs.

In response, New Zealand’s Devon Conway smashed a fighting century but didn’t get enough support from the rest of the batters as the visitors fell 90 runs short. Conway scored 138 off 100 balls, including 12 fours and 8 sixes. For the hosts, Shardul Thakur (3/45) and Kuldeep Yadav (3/62) picked up three wickets each, while Yuzvendra Chahal (2/43) bagged two scalps.

Shardul was named Player of the Match for his brilliant performance, while opener Shubman was adjudged Player of the Series for his consistent show throughout the three ODIs.

Another comprehensive performance from #TeamIndia as they outclass New Zealand by 90 runs in Indore to complete a 3-0 whitewash. 🙌🏽

fantastic series victory against the Kiwis who also played fabulous cricket. Ahead of the world cup, #TeamIndia appears to be in good shape. Happy to see good form of Captain @ImRo45 @imVkohli and youngsters like @ShubmanGill & @imkuldeep18. @BCCI

The new No.1 team in the @MRFWorldwide ICC Men’s ODI Team Rankings 🤩

Great to see our opening partnership do so well. @ShubmanGill has been supremely consistent and we all know when @ImRo45 gets going there is no stopping him.🏏💪🏻 #INDvNZ pic.twitter.com/tqmaLwid82

What a day for Rohit Sharma.

All bowlers chip in with valuable performances on a batting paradise as #TeamIndia complete their 2nd clean sweep of the year 🙌#INDvNZ #MenInBlue #ODI pic.twitter.com/DQ8rnZEqn6

And that’s another whitewash! 🔥

Complete dominance by 🇮🇳 in the first 2️⃣ series of the World Cup year. 👏

We win the #INDvNZ series and race to the 🔝 of the ICC Men’s ODI Team Rankings! 💙🇮🇳#TeamIndia | #AavaDe pic.twitter.com/Nk5W1Gk2O2

For latest cricket news and updates, subscribe to our Weekly Newsletter.