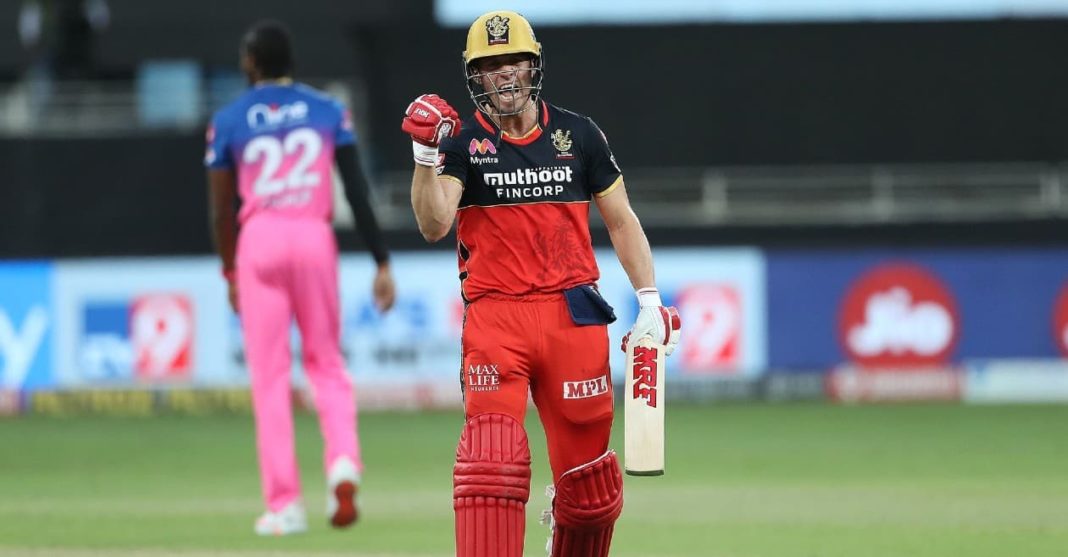 Chasing the challenging target of 178, RCB had an abysmal start as they lost opener Aaron Finch (14) cheaply in the fourth over of the innings. Skipper Virat Kohli (43) and youngster Devdutt Padikkal (35) stitched a vital partnership of 79-runs for the second wicket.

However, both Kohli and Padikkal couldn’t accelerate the innings. This made excessive pressure on the pair and due to which both lost their wickets in consecutive overs. RCB were in trouble but then came their spinal column AB de Villiers for the rescue.

De Villiers completely changed the scenario and took his team over the line by scoring unbeaten 55 off just 22 deliveries. He was well assisted by Gurkeerat Mann (19 not out). The game changed in the penultimate over of RCB’s chase bowled by Jaydev Unadkat, who conceded 25 runs in that over.

In the end, RCB won the game by 7 wickets to register their sixth triumph in IPL 2020.

Earlier, Steve Smith won the toss and opted to bat first. There was again a change in the opening pair as this time around Jos Buttler was missing at the top. Robin Uthappa (41), who used to open when he was a part of Kolkata Knight Riders (KKR), came to bat at his old spot. He was accompanied by Ben Stokes (15).

The pair started well and took Royals off to a flier. Uthappa looked terrific as he began to attacking RCB bowlers from the word go. Both the batters added 50 runs for the opening wicket before Chris Morris sent Stokes back into the dugout.

Then, skipper Smith (57) and Buttler steadied the ship by adding a crucial stand of 58 runs for the fourth wicket. The English wicket-keeper batsman fell on 24, but Smith kept on tickling the scoreboard and scored a gutsy half-century.

However, in the 20th over, Smith became the third victim of Morris. Rahul Tewatia (19) made valuable contributions down the order to take the team’s total to 177/6.

For Challengers, Morris was their most successful bowler as he picked up a four-wicket haul for 26 runs. Apart from the Proteas all-rounder, Chahal bagged two scalps.

Can you picture the chinnaswamy stadium right about now……… 👀👀👀 ABD ABD ABD.. mr 360 does it again. So good @ABdeVilliers17 the @IPL at its best..

It ain’t over till ABD sings! This is class @ABdeVilliers17 #RCBvsRR #IPL2020

AB De Villiers – once a genius, always a genius. What a wonderful chase. IPL logo shot by him, no wonder the logo is like his pose. #RCBvRR pic.twitter.com/OdE4Gw9ZtG

Wow! Just wow no more words can explain what I just witnessed! @ABdeVilliers17 unbelievable once again! Bringing the @RCBTweets Bangalore from the dead against @rajasthanroyals! Too freaking good #RCBvsRR #IPLinUAE

No one can be blamed pure brilliance, mr 360 AB develliers stealing the game from under the nose #RRvsRCB #IPL2020

Absolute genius @ABdeVilliers17 , what an outstanding display of hitting the ball all around the park. @IPL 👌🏻👏🏻💪🏻 #Dream11IPL

De Villiers is the 🐐 end of story!