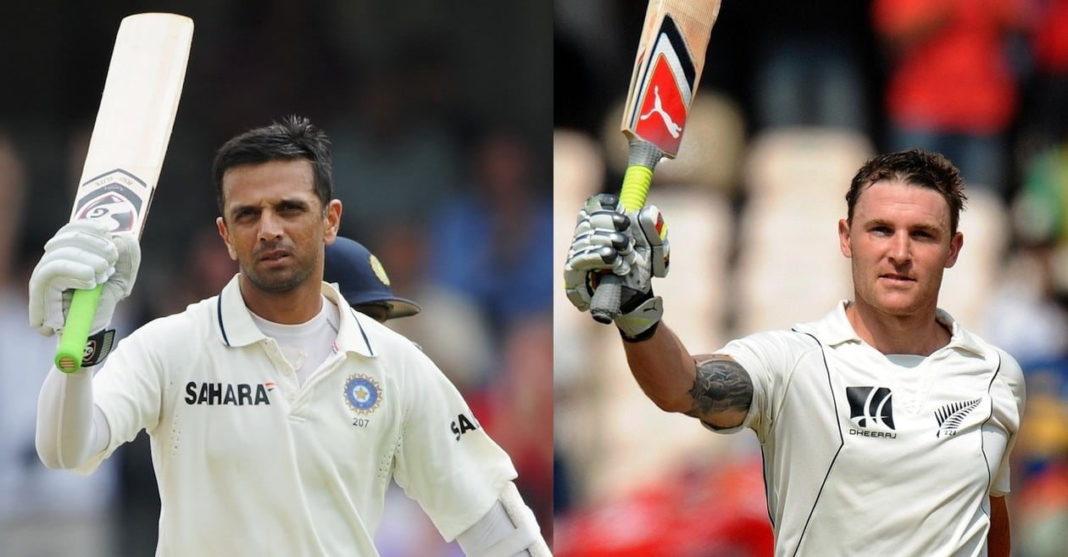 The Test series between India and New Zealand is ready to get underway from Thursday (November 25) at Green Park in Kanpur. Both the teams will play two matches in the upcoming series. The second and last game will take place at Wankhede Stadium in Mumbai.

Fans would be expecting a cracker of series, and some high-quality batting will be seen from both sides. India and New Zealand have always engaged in high-quality matches with some sensational performances by the batters.

From Sachin Tendulkar to Brendon McCullum, both nations have produced top-class batters who have always displayed top of the line performances to entertain their fans. On that note, let’s have a look at the top five run-scorers in India-New Zealand Tests:

One of the best batters of his generation, Bert Sutcliffe, was a superior strokemaker and a face of New Zealand’s batting. One of the biggest strengths of Sutcliffe was his unreal ability to adapt to different pitches and continue the consistency of scoring runs.

The Auckland-born attained great success against India, which was visible from his record. He played nine matches against India and made 885 runs at a phenomenal average of 68.07 with the help of three hundreds and as many half-centuries.

During New Zealand’s tour of India in 1955, Sutcliffe showed utmost skills and smashed a tremendous double century in Delhi. He made an unbeaten 230 in the first innings of the third Test, which was his highest score in Test cricket.

Another legendary Black Caps batter on the list is the former New Zealand skipper Graham Dowling. The high-class opening batsman enjoyed batting against the Indians as he smashed three hundreds in his glorious career, all of them came against his favourite opposition India.

Dowling appeared in 11 games against India and managed to score 964 runs at an average of 48.20 with the help of three tons and two fifties. He smashed his career-best 239 against India at Christchurch in the 1967-68 season to lead his side to their first win over the Indians.

Arguably one of the most explosive batters of his time, Brendon McCullum simply needs no introduction. His unreal ability to demolish bowling attacks made him one of the most dangerous batters in world cricket. The Otago batter, who brought the T20 approach in the red-ball format, enjoyed playing against India.

McCullum played 10 matches against India in Test cricket and scored 1224 runs at a breathtaking average of 68. He smashed four hundreds and two half-centuries against the Indians, including a triple-century at Wellington in 2014.

Overall, the wicketkeeper-batsman played as many as 101 Test matches for the Black Caps and made 6453 runs at an impressive average of 38.64 with 14 tons and 31 fifties.

Indian batting legend and the most influential cricketer of all time, Sachin Tendulkar, is at the second spot in the list. From the straight drive to backfoot punch and to some other shots such as paddle sweep, cover-drive, and square-cut, Tendulkar had the expertise to play all around the ground.

Tendulkar finished his splendid Test career as the highest run-getter and century-maker in the history of the game. The Mumbaikar amassed 15,921 runs in 200 Tests at a scintillating average of 53.78. He smashed 51 hundreds and 68 half-centuries in the longest format.

When it comes to his performance against New Zealand, Tendulkar scored as many as 1595 runs in 24 matches at an impressive average of 46.91. The right-handed batsman hit four tons and eight fifties versus Black Caps, with 217 being his best score.

The leader of the fascinating list is another Indian batting phenom Rahul Dravid. The Karnataka stalwart was known for his overseas heroics and ability to play and shine in the most challenging conditions.

Dravid, who was known as the ‘Wall of Cricket’, belongs to that elite list of cricketers who scored more than 13,000 runs in the longest format. The Bangalore lad played 163 Tests, scoring 13,625 runs with 36 hundreds and 63 half-centuries, including five double tons.

Dravid has also experienced an ample amount of success against New Zealand. The former India skipper appeared in 15 matches against Black Caps, where he managed to score 1659 runs, including six tons and as many fifties, with 222 being his best score.