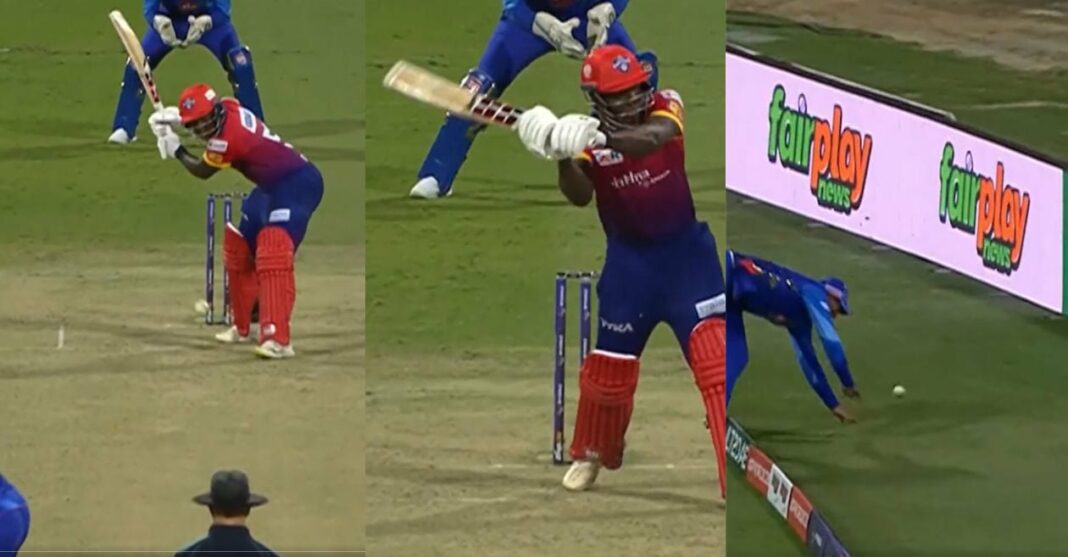 Asked to bat first, Dubai Capitals put up a massive total of 222/3 with the help of their skipper Rovman Powell’s 97 off just 41 deliveries. Joe Root (82) also contributed to the team’s total. Meanwhile, Fazalhaq Farooqi and Kieron Pollard were the only bowlers for MIE to pick a wicket.

During his storming knock, Powell smashed an MS Dhoni-like shot off Kieron Pollard‘s delivery, leaving everyone stunned. On the second ball of the 20th over, Pollard bowled a slower delivery towards the pad of the 29-year-old, which the latter sent over the boundary rope with a full-fledged helicopter shot.

Muhammad Waseem at the deep-mid wicket, attempted a jump and tried to push the ball in with one hand but failed to prevent the six. Fans on social media were thrilled to see the magical shot by Powell.

Rovman 𝘗𝘰𝘸𝘦𝘳 = Out of this Planet! 💪

In reply to DC’s gigantic total, MIE didn’t start well and lost three wickets with just 26 runs on board. Pollard shifted the gears and scored a quickfire 86 off just 38 deliveries, but the efforts went in vain as his team lost the contest by 16 runs. Najibullah Zadran also scored a fiery 30 off 9 balls but unfortunately ended up on the losing side.

On the other hand, Hazrat Luqman scalped two wickets for DC and gave away just 24 runs in his quota of four overs. Powell picked up a wicket as well and was adjudged ‘Player of the Match’ for his exceptional all-round performance.

MIE are currently placed at the third position in the points table, while DC are at the fifth spot.