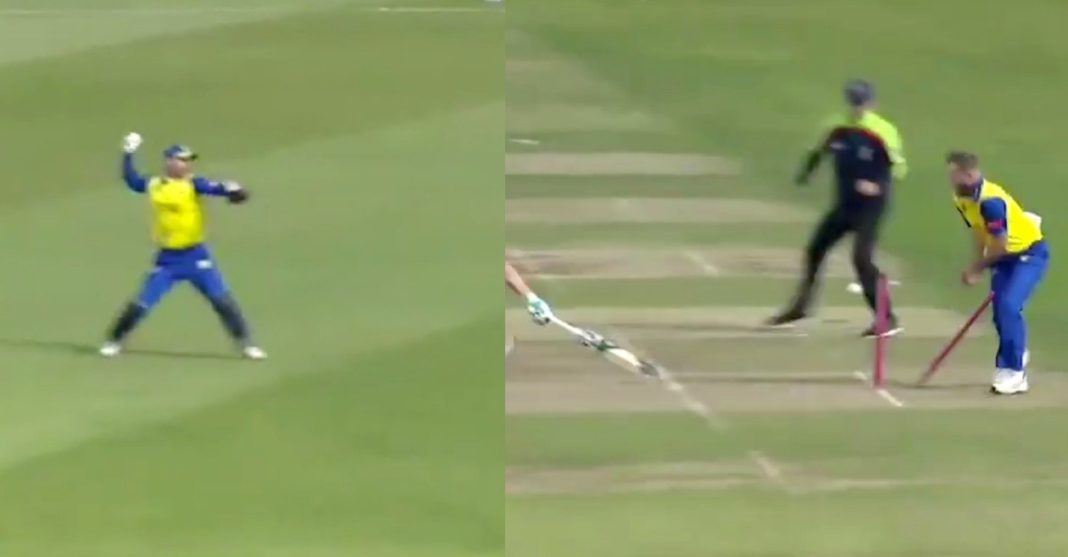 In response, Durham chased down the total within 16 overs. Batsman Ben Raine scored a half-century.

Durham all-rounder Matthew Potts bowled a top-class spell. In his four overs, Potts picked up three wickets and gave 19 runs. He first dismissed set batsman Harry Dearden (30), then sent Ben Mike (17) back to the dugout, followed by Will Davis (0). The 21-year-old received the ‘Player of the Match’ award for his three-wicket haul.

In the game, Durham wicket-keeper David Bedingham sent Leicestershire skipper Colin Ackermann back to the hut by producing an excellent run-out. It happened in the ninth over of the innings, when Ackermann tried to take a quick single on Bedingham’s miss field. The keeper soon turned the things by firing in a quick throw, and the ball hit the stumps before the batsman could reach his crease.

“Incredible arm for this run out by David Bedingham. Would you have tried to take a single there?” they captioned the post.

Incredible arm for this run out by David Bedingham 💪

Would you have tried to take a single there?

The Vitality Blast story so far

The T20 Blast is divided into three categories consisting of six teams in each group. In the North group, Nottinghamshire are the table toppers with 12 points. Similarly, Surrey and Gloucestershire are leaders of the points table in the South and Central group, respectively.

Among the North category, Leicestershire is at the third spot with seven points while Durham is at the second last position with five points.

The keeper-batsman Stevie Eskinazi from Middlesex is the leading run-scorer in the tournament. He has accumulated 350 runs in seven matches at an outstanding average of 50 and a strike-rate of 154.18.

Gloucestershire all-rounder Ryan Higgins is the top wicket-taker in the competition, having picked up 13 scalps in just six games with 4/34 being his best.

Essex bowler Simon Harmer has taken the most number of catches in T20 blast so far. The South African cricketer has grabbed seven catches in seven matches.

The final of the T20 blast will take place at Edgbaston in Birmingham on Saturday (October 03).