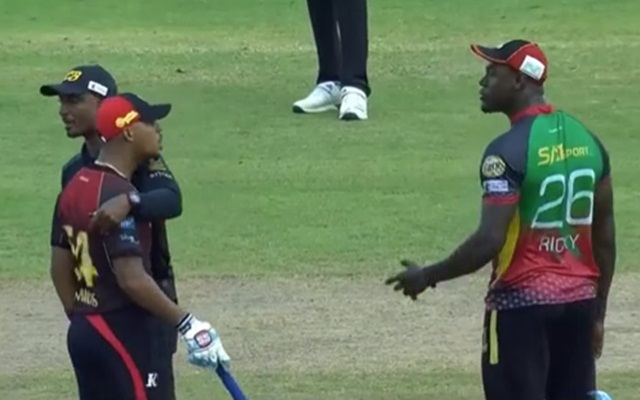 The incident occurred during the Knight Riders’ innings when Simmons was batting with wicket-keeper Denesh Ramdin. In the 8th over, Fabian Allen bowled a straight one to Ramdin, who flicked it towards square for a single. After completing the single, Ramdin and Simmons walked down in the middle to have a chat.

However, the Patriots’ skipper Brathwaite, who was unhappy with the chatter between the batsmen, took the bails off at the non-strikers’ end and appealed for a run-out. The umpire instantly dismissed the appeal, noting that the ball was dead, but a furious Brathwaite was not having any of it.

After an altercation with the umpire, Brathwaite indulged in an argument with Ramdin. Simmons then stepped in from the other end, and things got ugly after that.

The umpire finally had a lengthy chat with Brathwaite, and after a long delay, the game resumed.