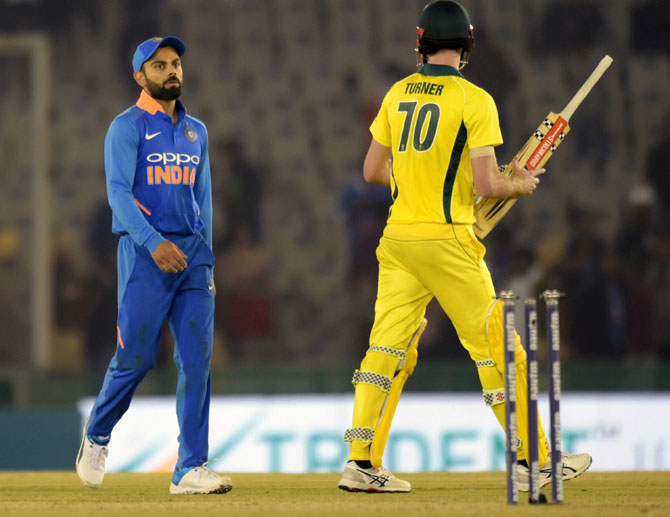 Coming to India for an ODI series will bring back some happy memories for Ashton Turner, who is set to play his first ODI in ten months. It was unfortunate that he had to miss out on a World Cup berth with David Warner and Steve Smith returning to the team after serving their suspension period. But Turner now might get to feature in a playing eleven alongside both the star batsmen.

Although he has played only three ODIs in his career thus far, Turner’s experience in Indian conditions might prove handy for Australia in the three-match ODI series. That knock in Mohali – an unbeaten 84 off 43 deliveries that helped Australia chase down a target of 359 and kept them alive in the series – is especially treasured by the 26-year-old who believes his past experience will hold him in good stead.

“Coming back to India, we love touring here. From my experiences here last time I had a really enjoyable trip and had some personal success and team success. That is my only experience of ODI cricket so far and the only experience I have to draw from. I have really fond memories of playing one-day cricket so far in my career,” said Turner.

“To be able to come here to India, historically it has been really tough for touring teams to come here and have success. For me to be able to play a role in getting that one-day series back on track…we were chasing our tails a bit, to contribute to winning that night in Mohali, I have fond memories. I take a lot of confidence out of that against a world-class team and a world-class bowling attack, it’s given me confidence that my ability is good enough against the best in the world.”

Limited opportunities in ODI cricket hasn’t deterred Turner, who says being selected in an Australian team is motivation enough to keep him going. And regarding this series, if it’ll serve as a proving ground for his T20 credentials and a possible berth in the T20 World Cup this year, Turner reckons the currency of runs is all that matters.

Ind Women vs SA: Additional T20I added to make up for...

Sachin shares an inspiring message for India women’s team ahead of...