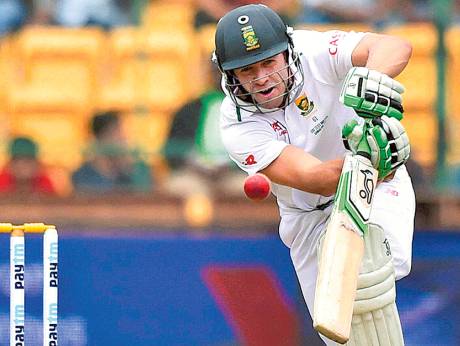 London: AB de Villiers’ absence from the South Africa team at Lord’s this week has been called a ‘red flag’ for Test cricket in a warning from the MCC World Cricket Committee about a looming crisis for the longest format amid the rise of domestic Twenty20 leagues.
De Villiers, the leading South African batsman of his generation, will not be a headache for England’s new captain, Joe Root, this Thursday as he is taking a sabbatical from facing the red ball. It began last year in a bid to manage his workload, and has recently been tipped to retire from Tests by the end of 2017.

The 33-year-old plays limited-overs international cricket and on the domestic Twenty20 circuit, leading the MCC World Cricket Committee chairman and former England captain, Mike Brearley, to describe his career choices as “symbolic of the problems” facing the sport.
Brearley, who has chaired the think tank since 2011 and now steps down from the role, also called on the International Cricket Council (ICC) to press ahead with mooted plans for a world Test league, along with an “admittedly idealistic” plea for cricket boards to rethink the distribution of central funds in the world game.
“The game is facing — if not a crisis — a looming potential crisis,” said Brearley. “This crisis needs to be noticed and taken seriously. For international cricket to flourish, competitive levels need to be close and teams need to be able to field their best players.

“The committee is worried that with the spread of privately owned Twenty20 leagues and the rapid increase in remuneration, more players from countries lacking the funds to pay them well will choose these tournaments ahead of making themselves available for their countries.”
The former New Zealand captain Brendon McCullum was also on the committee and said De Villiers’s decision was “another red flag moment”. He added the caveat that, like his own choice to play on in Twenty20 after retirement, lifestyle issues could be at play too.
As the MCC panel voiced their concerns in the Lord’s media centre, the Root era began in earnest on the Nursery Ground as the bat-and-ball flea circus that is England’s pre-match training whirred into life under sunny London skies in preparation for the first Investec Test.
Stuart Broad, who was here on Saturday as part of Nottinghamshire’s victorious Royal London Cup side and appears fit to play after recent heel trouble, said there was a different feel to proceedings, in part down to the new leadership but also due to the six-month break since the tour of India that ended in a 4-0 defeat and preceded Alastair Cook stepping down.
“It does feel like a new era with Joe as captain,” said Broad. “With the change of leadership it’s an obvious fresh start. I don’t think I’ve had a gap like this playing for England, which is nice as well because it reminds you how special it is and how lucky you are to be a part of it. I’m lucky enough to have played over a hundred Tests but this feels like a debut.”
— Guardian News & Media Limited, London 2017